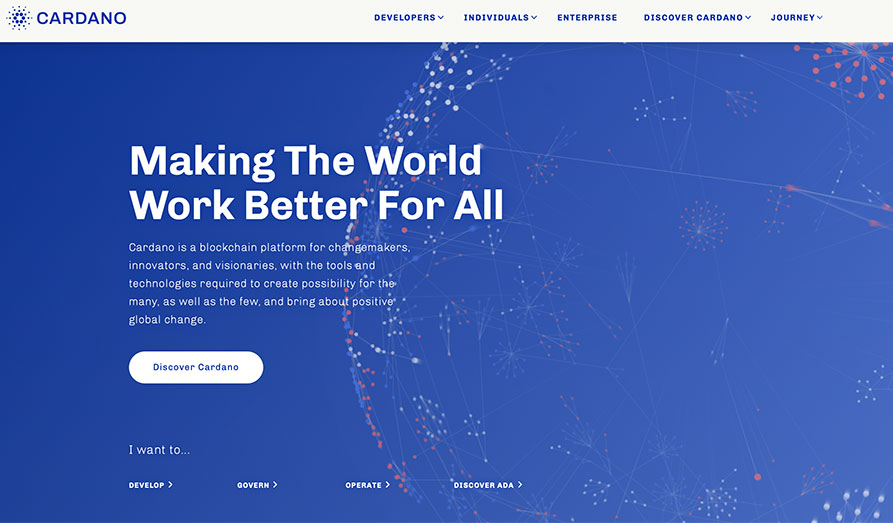 Cardona (ADA) is a decentralised proof-of-stake (PoS) blockchain platform that was created as a more efficient alternative to proof-of-work (PoW) networks. The infrastructure pressure of rising energy use, cost and slow transaction periods limits the interoperability, scalability and sustainability of PoW networks like Ethereum in the cryptolists.

As per the market indicators on Thursday, Cardona (ADA) is trading at USD 1.077, indicating that the crypto may be nearing the end of its downturn. Over the previous weekend, its data had suggested that the network had a higher transaction volume than the two most prestigious virtual currencies in the cryptolist: Bitcoin and Ether, according to blockchain analytics firm Messari.

On February 13th, 2022, Cardano had a transaction volume of $17.56 billion, according to Messari.io data. In comparison, Bitcoin, the flagship digital asset, only generated $10.65 billion during the same period, while Ethereum generated $5.77 billion.

Description: What do you know about Cardano (ADA)? Read our Cardano coin review to find out more.

On February 16th, Cardano surpassed Ethereum in transaction volume, with $15.06 billion. It recorded a volume of $6.71 billion per day in the last couple of days.

Approximated trading volume is still an effective method for identifying only the most critical transactions in the lists of the various cryptos. With a 24-hour volume of $14.26 billion, Cardano surpassed Ethereum on approximated volumes. Cardano clients also had the opportunity to pay cheaper fee rates than Bitcoin and Ethereum.

Cardano clients paid only $54,027.47 in transaction cost. This is insignificant compared to the $0.44 million and $25.87 million for Bitcoin and Ethereum, respectively. Just weeks after its market debut, Cardano’s SundaeSwap hit a milestone of much more than 100 million ADA traded.

Cardano’s transaction volume surpassed that of Ethereum back in January. On the other hand, Bitcoin and Ethereum’s higher trading volume typically implies higher transaction fees, but for Cardano, the opposite is true.

According to Messari data, the two most popular crypto networks collectively charged nearly $20 million for transactions on their blockchain, but Cardano’s blockchain only charged $51,985 for money transfers on its network.

These figures show that Cardano transactions are not only becoming more popular, but they are also significantly less expensive than those of its competitors.

Cardona is on the lookout for a good price

Cardano’s exchange costs have also been remarkably low, with the organisation spending only $51,985 so far. Despite the company’s normal blockchain load meter reading of 81 per cent, the transaction cost is exceptionally high for any company. That was when Cardano’s changed exchange volume first surpassed Bitcoin’s, signalling that something is trying hard and right.

IOHK, the organisation behind Cardano’s advancement, has recently sent out a series of updates that appear to support the organisation’s scaling and interoperability features. The Alonzo convention update, which introduced Plutus — a stage that offers a local savvy contract language and critical tools to aid fantastic agreements on Cardano — is an essential magnet for DApp developers.

Exchange volumes on the company have also increased as Plutus content, and Metadata exchanges take control of simple blockchain transactions. For instance, the introduction of decentralised trades, SundaeSwap on the Cardano blockchain, which is already renowned for its first-rate security features, has also added to the organisation’s allure.

Clients have also been attracted by the firm’s ability to endure various issues that perplex other blockchains, such as bombed exchanges due to organisation obstruction or disavowal of administration (DOS) assaults.

Cardano deserves credit for its constant redesigns, which have increased throughput and reduced idle time in the market volume. The blockchain platform has figured out how to deal with exchanges without interruption over the last 1500 days. However, despite Cardano’s organisation function being correctly designed and implemented, the worth of its coin, ADA, has not yet been salvaged in the more significant crypto market selloff.

As of this writing, the price is still a long way from its all-time high of $3.10 and is currently trading at $1.060, a long-term but crucial support zone. Though exchange volume only addresses the total worth continued on a blockchain, exchange volume illustrates a framework to reasonably look at UTXO style transactions and record-based exchanges, providing more data behind exchange quantity.

How to track your Cardona transaction

Blockchains are real-time networks that are highly transparent and accessible. However, the user tools available to understand and use that transparency productively require some practice.

Cardano block explorer — a service that allows a node on a network to extract information using various APIs — will assist you in searching for Cardano transactions by browsing blockchain data. You can also use the service to search for data stored on blocks, such as Cardano transactions and coin addresses. Block summaries show data from a specific time, such as Cardano (ADA) transactions and coins awarded to miners, among other things.