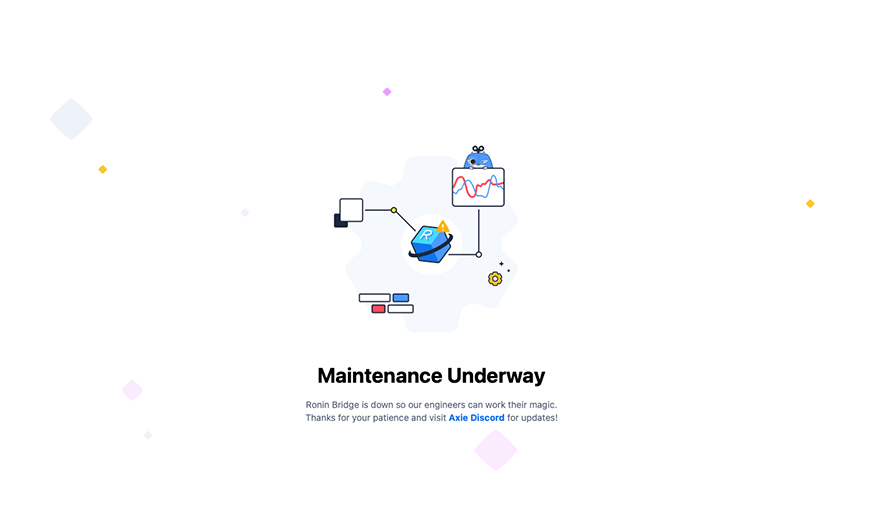 In the latest major crypto attack, hackers have sent shockwaves in the cryptocurrency world after stealing mainly Ether assets worth $600 million.

The hack has targeted Ronin Network (), a gaming-focused blockchain network that supports Axie Infinity. Axie Infinity co-founder Jeff Zirlin announced a keynote address at the NFT LA conference. He stated that the breach led to the exploitation of USDC worth around $25 million and 173 000 Ether. However, as per the blockchain analysis firm Elliptic, the combined value of the stolen assets was $540 million, making the hack the second-largest theft in crypto history.

The team behind the breached network states that they discovered that Axie DAO and Sky Mavi’s Ronin validator nodes were compromised almost a week ago, on the 23rd of March 2022. The team went on to say that the attacker or attackers used compromised private keys to forge fake withdraws. They discovered the terrible news after a report that a certain user could not withdraw 5k Ethereum (ETH) from the bridge.

Details about cooperating with forensic cryptographers, law enforcement officials, and investors to ensure that the stolen funds are reimbursed or recovered were revealed. They also added that they improved security, making all RON, Small Love Potions (SLP), and Axie Infinity Shards (AXS) on Ronin are currently safe. As a result of the attack, AXS went down almost by 9% in a day, while SLP dropped by 11%. Ron also crashed by 20%.

Description: Learn more about of the least hot assets of the day – Axie infinity. See AXS live prices and learn about pros and cons.

What happened to the Stolen Assets?

In a statement, Elliptic said its internal analysis has indicated that the theft culprit has already been laundering the stolen assets. The organisation stated that funds from the proceeds have already been transferred to three prominent crypto exchanges. An additional statement also said that the exploiter uses both decentralised and centralised exchanges.

At the time of the statement, they said that around 16 million USD in Ethereum had been laundered, leaving 524 million worth of crypto assets in several ETH accounts. The suspected accounts seem to belong to the hacker.

The crypto world has been plagued by hacks, Ponzi schemes and professional thefts since 2011. However, hackers seem to be making away with huge amounts of assets over the years. The latest breach in Ronin Bridge has seen the first quarter of 2022 end with the troubling news; there have been major attacks in the last years.

Some of the popular ones, according to Elliptic, include:

While crypto websites have their security measures, you’re advised to protect your assets as an investor. One of the best methods for doing this is to store them offline and ensure safe networks when making transactions. In addition, governments are also at the forefront to help curb crypto thefts and scams.

For instance, the US Department of Justice created a branch known as the National, Cryptocurrency, Enforcement team (NCET) in 2021. The DOJ used sophisticated analytical methods developed by the private sector to thwart the efforts of criminals who obfuscate details of crypto transactions.

The National Crime Agency in the UK is also looking for ways to deal with crypto-related crimes like money laundering. In addition, Interpol collaborates with various enforcement authorities and experts to boost the investigation, detection and disruption of networks behind virtual assets based on money laundering.

Blockchains and new analytical tools such as those used by Elliptic are also effective in tracing digital assets for longer durations. The concerned authorities also take advantage of blockchain technology to sift through thousands of crypto transactions to trace accounts owned or maintained by suspects.

What is Axie Infinity?

Axie Infinity (review) is a popular blockchain-powered play-to-earn game developed by Sky Mavis. The firm also developed Ronin—an Ethereum-linked side-chain specifically for Axie Infinity. This game revolves around Pokemon-like creatures known as Axies. Players collect these creatures as virtual pets as aspirations to battle in cartoonish wars. The player also breeds the axis, raises and builds kingdoms for them. Players need to collect three Axies via crypto assets to begin the game.