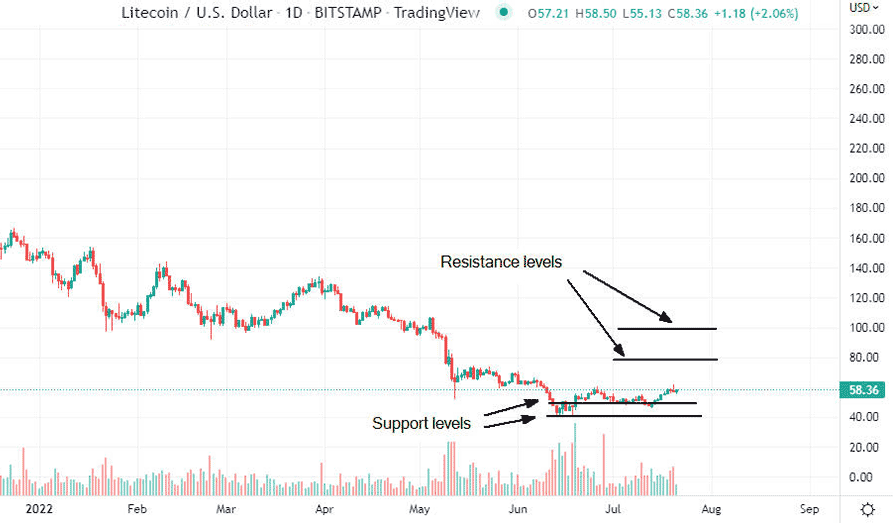 Litecoin (LTC) has been moving down since November 2021, and the price of this cryptocurrency crashed last month to levels not seen since September 2020.

But where is the price of Litecoin (LTC) going next, and what can we expect from the third quarter of 2022?

The crypto market saw modestly higher prices this trading week, despite warnings from analysts that the market could fall further, and traders are looking for an attractive bottom level to enter. On Wednesday, Bitcoin surpassed $24,000, which has also positively influenced the price of Litecoin.

Today, Crypto Lists will discuss Litecoin price estimates from a technical and fundamental analysis perspective. Please note that there are also many other factors to consider when entering a position, such as your time horizon, willingness to risk and how much margin you got if trading with leverage.

The last several months have been extremely taff for the cryptocurrency market. Cryptocurrencies have been suffering from heavy selling due to hawkish signals from central banks and uncertainty due to the Ukraine crisis. Many central bank officials have agreed that very high inflation warranted restrictive interest rates, and they confirmed that they would be open to being even more restrictive if inflation persists.

While the rate increases are intended to tame inflation and thus help the economy, investors are worried that an aggressive interest rate could tip the economy into recession. Risk-on assets tend to suffer in such conditions, and it is important to say that risky assets like stocks and cryptocurrencies have been considerably impacted by the US central bank’s tightening monetary policy.

International Monetary Fund Managing Director Kristalina Georgieva said that the US central bank is on the right path to bringing down inflation, and investors hope that the Fed will adopt a more accommodating approach at its following policy meeting. Matt Weller, global head of market research at Forex.com, said:

“Like many risk assets, the crypto market is benefitting from investors ratcheting down their expectations for the Fed’s peak interest rate this cycle to around 3.75% around the end of the year.”

Jeong Seok-moon, the head of South Korean exchange Korbit, said that crypto winter could end before the end of 2022, but he also thinks that the US Federal Reserve’s attempts to fight high inflation would continue to influence crypto markets in the meantime.

After hitting recent highs above $130 in March 2022, Litecoin (LTC) has encountered losses of more than 60%. The price has now stabilized above $50 support, but a break below this level would indicate that Litecoin could probably test the support level at $40.

On this chart (the period from September 2021), I marked the main support and resistance levels that can help traders to understand where the price could move. The more often price tests a level of resistance or support without breaking it, the stronger the area of resistance or support is. When the price passes through the resistance, that resistance could potentially become support. Litecoin remains in the “bearish phase, “but if the price advances above $80, it could be a sign of the trend reversal, and the next target could be located around $100. The current support level is $55, and if the price breaks this level, it would be a “SELL” signal, and we have the open way to $50. If the price drops below $50, which represents very strong support, the next target could be located around $40.

What speaks for the rise in the Litecoin price

Litecoin has surged more than 10% since the beginning of July, rising from $50 to a high of $61.77. The sudden upswing took Litecoin to test the $61 level multiple times, but it did not show enough strength to stabilize above it.

Litecoin remains in the “bearish phase, “but if the price advances above $80, it could be a sign of the trend reversal, and the next target could be located around $100. Traders should also consider that the price of Litecoin is correlated with Bitcoin, and if the price of Bitcoin jumps above $25000, we can see Litecoin at $65 or even $70.

Description: Trade LTC as spot or futures at one of the leading crypto exchanges. Try a free demo account at Bitget today!

What indicates further downfall for Litecoin

Many analysts and experts still remain bearish on Litecoin despite a huge sell-off in the last several months. The third quarter of 2022 will likely be a tough period for Litecoin, and according to Mike Novogratz, CEO of Galaxy Digital, cryptocurrencies could decline more than 50% from the current prices. Grayscale’s “Bear Markets in Perspective” report claims that the current bear market may continue for another 250 days, while Daniel Cheung, Co-founder of Pangea Fund, thinks that the worst month for cryptocurrencies could be August.

American investor Jeffrey Gundlach said that he would not be surprised to see Bitcoin at $10,000, and if this happens, we would see Litecoin (LTC) below $30. Jeong Seok-moon, the head of South Korean exchange Korbit, said that crypto winter could end before the end of 2022, but he also thinks that the US Federal Reserve’s attempts to fight high inflation would continue to influence crypto markets in the meantime.

Bitget got Messi, but no US or EU crypto license
Tuesday, 29 Nov 2022 2:26 pm
Lionel Messi, the 35 year old Argentinian football star that plays for Paris Saint-Germain, is now the biggest name to promote Bitget. Unfortunately, Bitget do not have any license to conduct cryptocurrency trading or investing in Europe or the United States. When asking them about it, they claim to have a license, but in the end - they do not have it (which Crypto Lists found out after extensive research). Still, they get Messi onboard, to promote their brand. Do not fall for it. Trade with a serious broker such as Skilling if you like CFDs, or go with an exchange s...
Read the full newsflash
Review: BITGET

1 billion crypto users in 2030, says Bitget in new report
Wednesday, 27 Jul 2022 4:26 pm
A new report from Bitget together with Foresight Ventures and BCG reveals that the amount of cryptocurrency holders and investors will increase from around 300 million in 2020 up to 1 billion users in 2030. The biggest holders of crypto reside in United States, where the average cryptocurrency wallet consist of digital assets worth around 18 000 USD. Have you got enough crypto in your portfolio? If not, sign-up for Bitget now!
Review: BITGET BGB

BCG & Bitget about the future of crypto exchanges
Tuesday, 26 Jul 2022 12:07 am
Boston Consulting Group (BSG), Bitget and Foresight Ventures has created a crypto industry report. about how the future of crypto transactions from DEX and exchanges might looks like. The report consider that cryptocurrencies and blockchain is still in the beginning of the adoption curve and point out 3 major maxtro trends that heavily impact the growth of crypto exchanges. The report claims that top emerging markets for crypto include Nigeria, Thailand, Philippines, Vietnam, Argentina and...
Read the full newsflash
Review: BITGET BGB

C++ Becomes the Best BitGet CopyTrader in July
Thursday, 21 Jul 2022 7:20 pm
There are some amazing results among the copy traders at Bitget. The winner so far in July is called C++ and he is mainly doing crypto day trading with ETH. From 69 trades in July, he got a 100% win rate so far and 12225% ROI. While it is not common with such high returns, this is definetely a guy Crypto Lists will continue to follow. Have you tried copy trading yet, where you simply copy a selected trader that match your risk level? If not, sign-up for Bitget CopyTrading now!...
Read the full newsflash
Review: BITGET