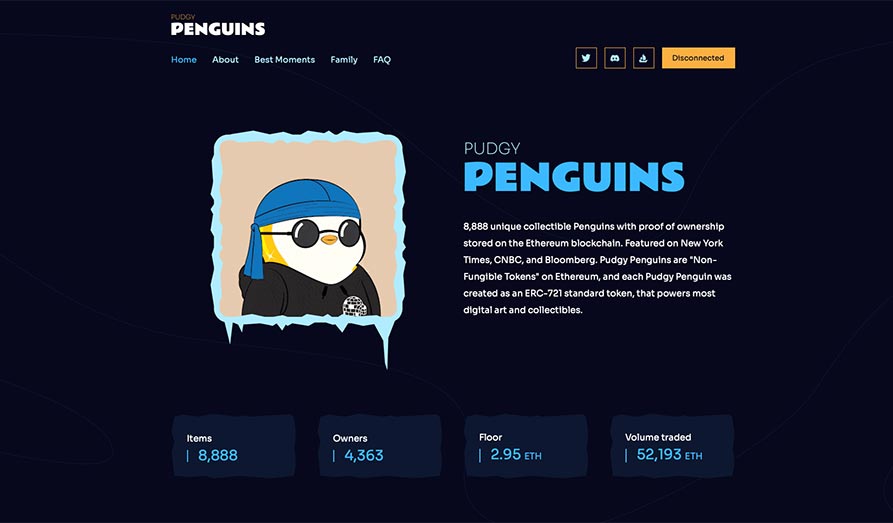 The winter is over, and the spring is beginning. However, Penguins are still hot, especially in the NFT world where the entire Pudgy Penguin project sold for 2.5 million USD. Today, the flor price for Pudgy Penguins raised to 2.95 ETH, Crypto Lists Ltd report.

The Pudgy Penguins has come under a new control after being sold to Los Angeles entrepreneur Luc Netz. The long-awaited $2.5 million sales of the non-fungible token (NFT) project, happened at the end of March 2022. A group of investors led by Luca Netz bought the control of this NFT project along with royalties from the four original co-founders including Patterson, Cole Therum, Mickyj, and Jonah. Netz will become the new leader, and his peer Cameron Moulène will be among the other stakeholders.

The new owner had plans to officially announce the deal’s completion on social media in late Saturday, even after the sale was completed before. He stated that he didn’t want the announcement to be passed for an April Fool’s joke, meaning he had to wait for the day to pass.

In his statement, Netz said they have plans aligned to place Pudgy Penguins among the most prominent projects. He also implied that at least one retail partner would be involved but declined to comment on specific roadmap items.

Effects of the Sale Pudgy Penguin Collection
As rumours of the sale spiked on Friday last week, Pudgy Penguins NFT Open Sea trading increased. The floor price of a Pudgy Penguin increased to 2.5 ETH. This change is after trading bounced between 0.7 and 1.4 Ethereum ETH in the recent weeks. Currently on Open Sea, the cheapest penguin on offer stands at 2.9 ETH. Will it be a trending collection, that reaches 10 ETH floor price before April is over – or is the story short lived? You decide.

One of the most significant rumours circulated on Friday was the long-awaited Pudgy Penguins token. This rumour fuelled the penguin buying frenzy. This rumour has its basis in launching ApeCoin ($APE) of the Bored Ape Yacht Club by Yuga Labs.

Description: Get Ether for your NFT purchases. Try trading NFTs after getting more ETH from Binance today!

The sale of this NFT collection comes a few months after its community ousted the four founders. In January 2022, the founders were exposed after attempting to sell the project after pocketing proceeds from NFT sales. Many Pudgy Penguin holders were upset after hearing the news. Still, it wasn’t surprising to many that the founder was under fire for unprofessional behaviour before the newer scandal.

However, the token had faced a decline in sales after lofty promises made by the founding team failed to bear fruits. Some of the failed promises include launching a token, a children’s book, and a Metaverse game, all centred on the images of the penguins.

After ousting the founders of Pudgy Penguin by the community, founder Zach Burks—the founder of Mintable, offered to buy the project for 750 ETH. However, Netz and his team beat him to it and got the deal.

What Are The Pudgy Penguins?
Pudgy Penguins is an NFT Profile Picture Project (PFP) founded by the four co-founders. The project was launched in July of 2021 and quickly became famous in the NFT world. The project has 8,888 unique collectible Penguins, all donning unique fashion accessories, including baseball caps, scarfs and jackets.

Proof of ownership of the Penguins is stored on the Ethereum blockchain. Each one is created as an ERC-721 standard token, which powers a significant number of digital collectibles and art. The launching of the Pudgy Penguins led to over ten thousand copies of PFPs, especially on Twitter.

The project gathered a tremendous rise in daily transaction volume, popularity, and growth in floor prices. After a few months, the project faced a downward spiral leading to its sale.

Matching On
Gaining control of the new project will allow the new owner to conduct airdrops to NFT holders of this series and launch a token. With this new leadership, the Pudgy Penguins can put the negativity behind them and begin a fresh chapter. Luca Netz has an amazing business track record and a philosophy of compassion. He also has inclusivity goals, which is a character much needed in the pudgy penguins.