VeChain and TruTrace Announce List of Industries on Blockchain 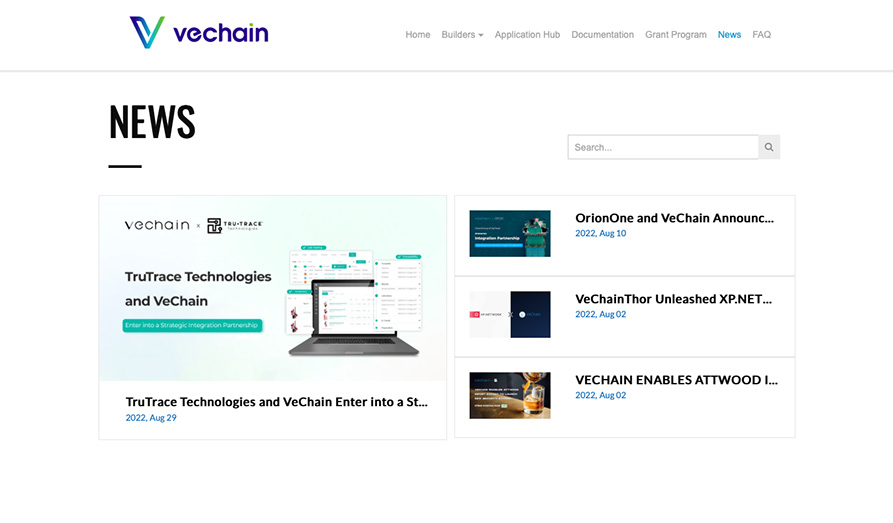 VeChain and TruTrace have officially announced the list of industries they will incorporate into their blockchain solution.

TruTrace is a firm based in Canada that operates a Software as a Service solution. The announcement was via a recent tweet that claimed that the VeChain platform will integrate TruTrace’s various industries. These include its legal cannabis, food, fashion, and pharmaceutical industries. Not a bad list, right? There are top lists for everything and you probably already seen the top list of blockchains, the top list of crypto trading and the best deposit methods for crypto. Now it is time to discover more about the industries that VeChain and TruTrace will work with.

VeChain has identified the basic needs goods as an opportunity to mainstream blockchain adoption. Its blockchain integration with TruTrace supports this.

Food, medication, items of clothing, and the emerging marijuana industry are all considered essential goods. These goods are an integral part of human life and sustenance. The integration of these industries with blockchain seemed inevitable and had to happen at some point in one way. There was only a matter of time before we hear of fundamental specifications shifting to Web3.

These basic essential goods are all products that TruTrace has received reputable acclaim. Initially, legal cannabis was the primary focus area, but the agreement with VeChain will now integrate all SaaS platform areas as per the announcement.

The VeChain foundation views the direct link between TruTrace and the Vechain ToolChain as a means to streamline TruTrace offerings. The link enables TruTrace to offer businesses providing quality and authenticity a seamless fast way to start using blockchain in their operations. Businesses benefit from this as they do not incur costly investments in infrastructure and management of digital currencies.

As previously reported by Crypto Lists, the VeChain and TruTrace partnership is not new. Before the announcement, the two companies had announced their collaboration in late August 2022. The announcement outlined that the firms will integrate complementary technologies in promoting blockchain technology.

There is no doubt that blockchain technology is an integral pathway for the future. Blockchain is used in various industries and not just in banks. These include music, real estate, mining, and others. This is evidenced by companies and service providers positioning themselves while preparing for Web3 and a future on the blockchain. The unique value proposition of blockchain is that its usage in particular industries increases transparency. One interesting sector that Crypto Lists read about is how blockchain will streamline future food delivery.

Blockchain technology has garnered substantial attention with the emergence of cryptocurrencies due to the several merits it offers. TruTrace and VeChain aim to demonstrate this with TruTrace integrating some of its industries into the blockchain.

Description: Ready for crypto trading with CFDs? Check out Capital – the international trading firm with a wide range of instruments and flexible platform where you can adjust the leverage.

Why VeChain is a Suitable Partner for TruTrace in Blockchain Integration

VeChain Technology is a reputable and popular blockchain startup founded in 2015. It is enterprise-friendly by striving to provide blockchain technology into the mainstream and the real world by offering businesses customised blockchain-enabled solutions. It hosts a low code blockchain-based platform known as the VeChain ToolChain TM. It facilitates enterprise clients to develop and propel digital transformation on a global scale faster.

The VeChain technology is a leader in real-world blockchain applications with international operations in China, France, Singapore, Japan, Italy, Luxembourg, and the United States. VeChain has also formed partnerships with several reputable companies in various industries. These include Walmart China, BMW Group, Shanghai Gas, ASI Group, and others.

It most recently announced a partnership with OrionOne, a Software as a Service firm. Moreover, Vechain and UCO network announced their partnership in building blockchain infrastructure for the biofuel sector. The blockchain platform does not only focus on basic essentials as with TruTrace but also on the energy sector. The host of reputable and strategic partnerships indicates a sign of trust and belief that TruTrace can benefit from.

TruTrace technologies is a Canadian Software as a Service (SaaS) firm that utilises blockchain technology. The technology assists TruTrace in completely integrating software enabling its users to store, manage, exchange, and access data and information on quality assurance and testing. This facilitates Certificates on Authenticity (COA) and motion and movement intelligence on inventories. It particularly emphasises the authentication of source materials and chemicals in formulation. The TruTrace technology platform development was to specifically facilitate traceability of testing standards in legal marijuana, culinary, nutrition, and pharmaceutical spaces.

During the unveiling of the VeChain and TruTrace partnership, Jason Rockwood, General Manager for VeChain US Inc, stated that VeChain is associated with consumer product traceability and storytelling. TruTrace has a specific niche in various industries including the highly regulated cannabis that complements the company’s growth strategy in North America. Keep track on the top list of blockchains; perhaps VeChain will be added within short. In contradiction to many other networks, VeChainThor use the proof of authority consensus protocol.