2014 marked the launch of Monero Blockchain, and it has seen remarkable growth since then. Its transition to another database structure provides more efficiency and flexibility, increasing security, simplicity, and use efficiency. The real advancements in privacy unmask its capability to perform better than significant networks, and cryptographic security uses the latest and most resilient encryption tools. Its features promote its Proof of Work algorithm that specializes in mining hardware from dominating the network and promotes block rewards distribution.


It is known for its decentralization and privacy standards, which secure transactions and finances at fast rates under highly advanced technology. It is a payment network with untraceable transactions reducing system deficiencies through the proof-of-work (PoW) consensus algorithm and cryptographic security, updated every nine to 12 months, to enhance anonymity and mine hardware from dominating the network and allow for fair distribution of block rewards. It is an open-source community project with no company or CEO and promotes utmost transparency through global collaboration. Its recent hard fork made permanent changes to the network, reducing the need for bi-annual hard forks. Users do not need to download the whole platform for network transactions and can connect to a remote node.

It is under a PoW system consensus with ASIC resistance that has untraceable transitions via ring signatures and has cryptographic security that contributes to anonymity and mines hardware to ensure the distribution of block rewards. There is no company owning the blockchain or a CEO but operates as an open-source community that involves the community in developing the blockchain proposing new features and providing bug fixes for previous platform versions. The blockchain supports fast, censorship-resistant, and low-cost transactions with emission curves to incentivize users to mine the token in the platform and keep the blockchain secure. Its native token, XMR, is utilized in making electronic payments with no check clearing fees, and fraudulent chargebacks. It experiences network upgrades every 9-12 months to add important protocol improvements.

The secure, private and untraceable blockchain.CryptoLists.com

This Blockchain was launched in April 2014 and has shown exceptional progress with updates and community changes while several improvements show the platform's migration to another database structure with better efficient strategies and minimum ring signature sizes to make the transactions private. RingCT is meant to hide transaction amounts. It is an untraceable and privately secure platform that uses a proof-of-work algorithm to conduct its operations via ASIC resistance devices while being open-source and available to everyone, it provides block rewards to miners that provide security to the network. The platform's features make it unique as it uses ring signatures that enhance anonymity in transactions and uses random addresses for its anonymous routing, which does not expose a recipient's holding while stealth transactions and multiple inputs/outputs per transaction, stealth addresses, and ring confidential transactions enhance its privacy. It creates new blocks every two minutes and has no maximum block size contributing to faster transaction speeds and lower costs.

Anyone can use the platform to facilitate cryptographically secure and untraceable transactions as it is permissionless and open-source. Users gain privacy benefits and anonymity as every single transaction uses three technologies that can continually be updated. RingCT, Stealth Addresses, and Ring Signatures are the three technologies that keep transactions private. It develops projects and updates to enhance crypto privacy and security. It also facilitates MONERO (XMR), the native token's crypto transactions in fast and affordable payments.

+ The blockchain is highly secure through its ASIC-resistance Proof of Work mechanism.
+ Monero netowork promotes censorship-resistant transactions for its users via various technologies.
+ Facilitates fast and affordable payments around the globe.
+ There are no block limits hence it is highly scalable

- Utilizes ASIC resistance computers that are expensive for most entities to acquire
- Some users' antivirus flag Monero's software as malware and remove it
- The blockchain's support for Tor is in its infancies to connect nodes
- Full nodes require significant storage and time to download the entire blockchain.


One can mine its token to get XMR from the block reward. Monero's emission is at 0.3 XMR per minute and 0.6 XMR per block with 1% inflation for the first year and approaching 0% in future years. Miners receive 0.6 XMR as block reward and transaction fees of users on that block which incentivizes miners to keep securing the network. Users do not incur wire transfer and check clearing fees. It has the wallets released by the Core Team and a wide range of trusted open-source third-party wallets, which incur different costs depending on the third-party service.


Cryptographic security enhances the discussions about the platform with conversations on its anonymity, benefits, and potential in cryptocurrency. Users are excited about its high scalability, no block size limits, and it provides anonymity with its transactions and ranks it highly and use it as it works better than most major blockchains. The anonymity protocol is effective and helps people obfuscate their ownership of cryptocurrencies. It ensures no one can link another to a Monero cryptocurrency transaction and enables one to send and receive transactions in a way that does not reveal data directly to onlookers. The integration of advanced fungibility protocols is a feature that makes users want to associate with the blockchain and its token. As an open-source blockchain, it lets other users make decisions concerning its development and updates. It is ASIC-resistant and uses a randomx algorithm to reduce the efficiency of ASICs, ensuring miners can compete fairly, and making them content with its dynamics.

It is owned by an open-source community and has no CEO or company running it.

Is Monero network proof of stake?

It operates with ASIC-resistant Proof of work mechanism.

In which ways is the Blockchain considered an anonymous network? 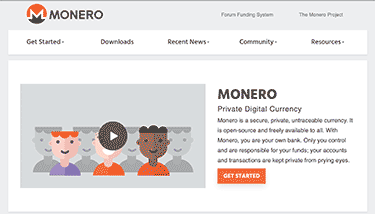 February, 2015 - Monero's first website went live. Similar to today, it was described as a secure, private and untracable virtual currency. Monero wrote that: "You are your own bank, you control and are responsible for your funds, and nobody can trace your transfers". The project moved from monero.cc to getmonero.org, while MRL-0004 was released.

August, 2017 - The new Monero website went live, with an updated web design. Private Digital Currency was the main slogan. The consensus method for Monero was described as "can't be hacked to steak your funds, due to the power of distributed consensus". Monero is fungible, meaning one Monero will always be equal to another, was another slogan on the front page in August, 2017.

XMR is the native coin for Monero. It is therefore also worth reading more about that on the link below.