Google Partners with Coinbase to Accept Crypto for Cloud Services 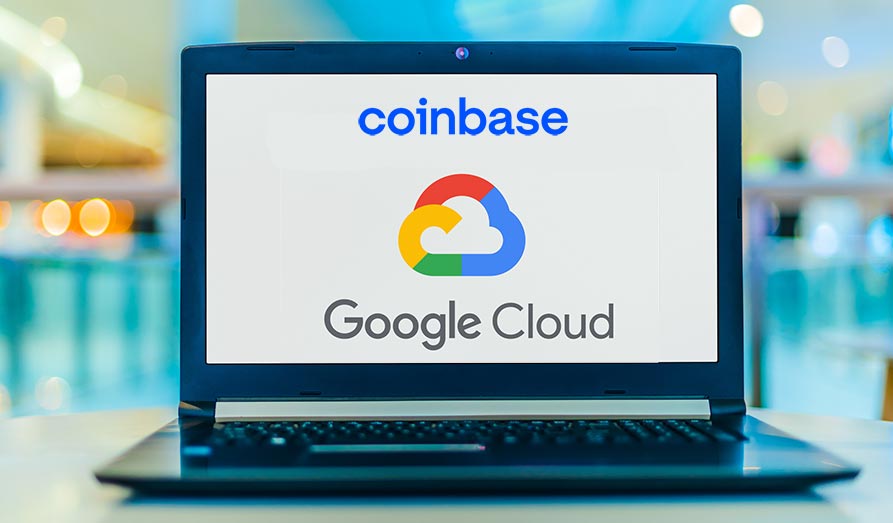 Crypto enthusiasts celebrate Google’s recent announcement regarding their leniency to accommodate crypto. Google has announced that it shall collaborate with the well-renowned American crypto exchange, Coinbase, to facilitate crypto payments for its cloud services. The tech giant showcases its support for cryptocurrencies through this recent partnership with crypto adoption on the rise among several nations. This move is popular as several users prefer payments with crypto such as Ether or Solana, since it is cheaper and faster.

Google’s partnership with Coinbase facilitates the tech giant to receive crypto payments via an integration with the crypto exchange. Google Cloud Vice President and General Manager Amit Zavery, also highlighted that the strategic partnership with Coinbase is via Coinbase Commerce. It facilitates crypto payments for merchants and will initially be rolled out to some customers within the Web 3 industry who will be able to make payments using various coins and tokens. Currently, Coinbase Commerce accepts ten cryptocurrency payments including Bitcoin, Ether, Litecoin, Bitcoin Cash, and Dogecoin. The feature is to be extended to several users over time.

The announcement occurred during Google’s Cloud Next Conference on Tuesday. The impact of its partnerships will reflect in early 2023 when it will allow crypto payments for cloud services. The new partnership facilitates the tech giant to keep its position as an industry leader ahead of its competitors.

Coinbase to Shift from AWS to Google Cloud

Coinbase has deployed its data-related apps on the Amazon Web Services Cloud for several years. The new partnership will cause Coinbase to shift from Amazon Web Service to Google’s Cloud infrastructure. Coinbase Vice President of Business Development, Jim Migdal, reiterated this by stating the crypto exchange will move its data-related apps to Google data storage services. He also revealed that the discussion with Google had been ongoing for several months. Google will also seek to utilise Coinbase Prime to store organisations’ cryptocurrencies securely.

Brian Armstrong, CEO of Coinbase, conveyed his excitement over Google Cloud selecting Coinbase to have Web3 accessible to new users and facilitating effective solutions to developers. He further revealed the crypto exchange has amassed over 100 million verified users and 14,500 institutional clients. In a decade, it has built industry-leading products aside from blockchain technology.

Previously, the tech giant was pessimistic or at least careful about the cryptocurrency industry, as reported by Crypto Lists. At the time, it did not support crypto advertisements on its platform. However, in June 2021, it announced it was revisiting its policy and would enable them. This was the first step towards its growing interest in crypto and boosted several brokers, exchanges, and platforms, as highlighted by Crypto Lists. Google’s parent company, Alphabet, invested $1.5 billion in various blockchain companies, including Dapper Labs and Alchemy.

The Chief Executive Officer of Google, Thomas Kurian, did not reveal the terms of its recent deal with Coinbase. However, he expressed the desire of the company to build a faster and easily accessible Web3.0. The partnership with Coinbase assists developers in reaching this goal. Google Cloud has been active in developing a Web 3 presence. It announced in January that it is in the process of assembling an internal team dedicated to digital assets. To further stamp its ambition, it hired the former executive of Paypal, Arnold Goldberg. His role is to lead its payment division and prospect ways of utilising crypto as a payment method. Google also partnered with SkyMavis in September 2022. It is the creator of the popular play-to-earn NFT game Axie Infinity. The partnership assists SkyMavis upgrade the security of its Ronin network and act as an independent validator. This happened after SkyMavis’ $600 million breach on its network.

The tech giant also built on its crypto features and services by showcasing Ethereum wallet balances when users search for an address on Google. The BNB Chain partnered with Google Cloud to develop early-stage Web3 and blockchain startups. Crypto Lists also unveiled that it operated a countdown toward the Ethereum merge in September.

Coinbase Stocks rose significantly by over 6% at $71.32 shortly after the announcement of the partnership with Google. Crypto Lists believes partnerships of this kind will continue to emerge in the crypto-verse and Web3.0. The crypto economy will expand in the long term and Coinbase will grow into an integrated digital asset enabler than just a crypto exchange.

Apple suspends Coinbase Wallet NFTs over gas fees
Friday, 2 Dec 2022 10:54 am
In somewhat alarming news, Apple has claimed its entitled to 30% of Coinbase Wallet's NFT gas fees. The tech giant says fees need to be paid through their In-App Purchase system, which at present is impossible due to the way blockchains work, and the lack of support for crypto within the Apple ecosystem. Yesterday, they suspended the wallet entirely from the App Store until Coinbase removed the NFT section. Whether this can be rectified soon is still to be clarified, and Crypto Lists endevour to keep you up to date on all new developments. If you'd like to check out Coinbase for yourself, you can...
Read the full newsflash
Review: COINBASE APP APPLEPAY

Coinbase Pro begins migration to main Coinbase site and app
Friday, 18 Nov 2022 6:11 pm
Coinbase Pro has begun to migrate customers over to the primary Coinbase platform and mobile app. Tom from CryptoLists is a daily user of both Coinbase and Coinbase Pro and today received an email informing him that the migration had been completed. We expect this to be rolled out swiftly across the whole userbase. All the expert features from Pro can now be found in the 'Advanced Trade' section of the standard Coinbase, so both beginners and knowledgeable traders have everything in one place. Do you want to try out the new-and-improved main app/platform? Sign-up for a Coinbase account here. ...
Read the full newsflash
Review: COINBASE APP Review: COINBASEPRO