Luna Foundation Guard has acquired $1.5 billion worth of BTC 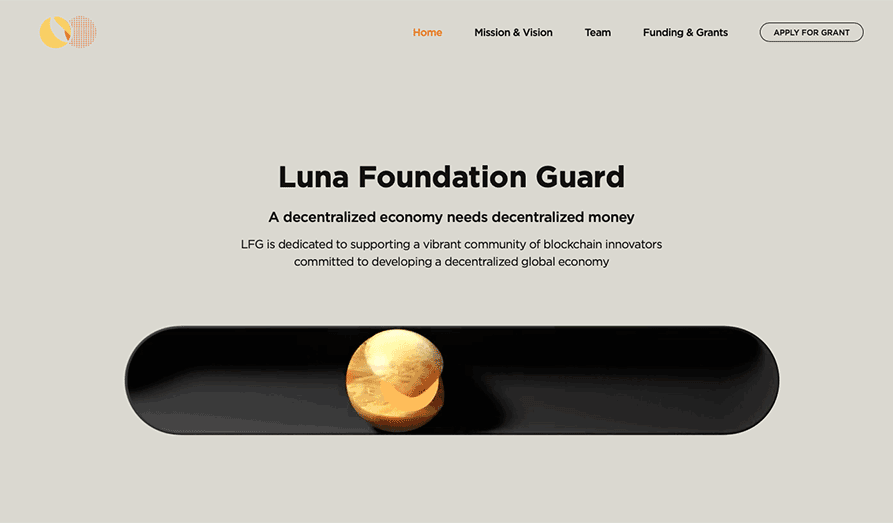 Tesla, the 2nd largest corporate holder of Bitcoin has just been surpassed.

Tesla holds 43,200 BTC, currently valued at close to $1.7 billion. The recent transaction by Luna Foundation Guard (LFG) adds another 37,863 BTC valued at around $1.5 billion ensuring them a higher position over Tesla with the bitcoin reserves of LFG now totaling 80,394 BTC valued at over $3.1 billion, CNBC reveals. Do Kwon, the founder of LUNA, is counting on the oldest cryptocurrency as a safe heaven for his stablecoin UST.

What is the Luna Foundation Guard? (LFG)

The foundation is a non-profit organization that was created in 2017 to protect the blockchain and digital currency industry via their the Terra ecosystem which represents a large, global security market and employs the best-of-class blockchain technologies from around the world to provide enhanced protection for cryptocurrencies. The foundation’s goal is to help ICOs become more mainstream, as well as to protect investors against fraud and theft.

The Co-Founder and CEO of Terraform Labs, Do Kwon is determined to reach the $10 Billion goal he set out. With the recent successful deals accomplished, Do Kwon is hoping to attain his goal by the end of Q3.

In addition to the latest deal, Terra bought 2500 bitcoin in mid April which is roughly valued at $1 million as well gifted the Luna Foundation Guard $1.1 Billion LUNA to burn and mint more Terra USD. This is besides the $200 million Terra and LFG invested in AVAX tokens. TFL was able to swap its LUNA and LFG did an over-the-counter buy with its Stablecoin, solidifying their partnership with the Avalanche Foundation as its 2nd Layer-1 token.

This week Luna Foundation was able to do a $1 Billion OTC purchase facilitated via Genesis, a prime broker. The never done before OTC deal involved swapping UST Stablecoin to the value of $1billion for $1 Billion worth of Bitcoin ( BTC). They then bought $500 million worth of BTC from Three Arrows Capital, a well known cryptocurrency hedge fund.

“For the first time, you’re starting to see a pegged currency that is attempting to observe the bitcoin standard, it’s making a strong directional bet that keeping a lot of those foreign reserves in the form of a digital native currency is going to be a winning recipe.” said Do Kwon, who is quite optimistic for the future of cryptocurrency. Should we view his recent purchase as a sign that Bitcoin is at rather low levels now, and that it could be an investment opportunity? Bloomberg claims that Do Kwon is the most watch crypto whale at the moment, after buying BTC for $1.5M and planning to keep adding to the stack.

Description: Try the Scandinavian crypto site called Skilling for your next Bitcoin transaction. Get started in 30 seconds with a free account!

Terra’s strategic bitcoin acquisition goals have significantly aided to grow its UST reserves which now stands at approximately $3.5 Billion, securing its place as one of the top 10 BTC holders. Moving forward, Luna Foundation Guard will provide the capital needed to purchase an additional $1.4 Billion worth of BTC and the Terra protocol will assist in obtaining the remaining $7 billion bitcoin through its users. This strengthens UST as users would need to add bitcoin to the reserve and mint UST thus making Stablecoin more prominent in the Cryptocurrency ecosystem.

The first ever Block of bitcoin ever mined was back in 2009 by Satoshi Nakamura himself. The Genesis Block is basically the foundation of the Bitcoin trading system we’ve come to know today. It’s also a fitting name for the well known trading company partnering with the Luna Foundation Guard.

By participating and facilitating in this transaction with the Luna Foundation Guard, the company is building its reserves in Luna and UST and using them to interact with their borrowing counterparties, who may be looking to get access to the crypto ecosystem in a risk-neutral way.

It also enables Genesis to distribute some of the Terra assets to counterparties that may have difficulty accepting those assets on an exchange. “Terra’s remarkable growth has continuously reshaped crypto markets over the last two years, Genesis is excited to be a liquidity partner to the Terra ecosystem, connecting it to a broader audience of institutional market participants.” said Joshua Lim, head of derivatives at Genesis.

Description: What do you know about Bitcoin? Read the latest news from Crypto Lists Ltd today!