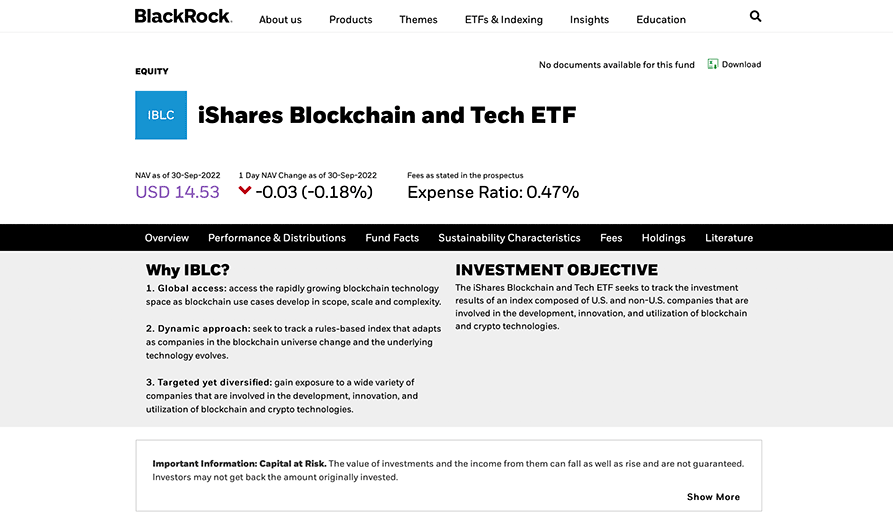 The multinational investment company has over $8.6 trillion in assets under management( AuM). The new blockchain, known as the iShares Blockchain Technology UCITS ETF (BLKC), was launched on 27th September 2022. The ETF for Europe has similarities with the one launched in the United States, but is mainly aimed at professional investors in EU with over 700 000 EUR to invest. However, European businesses with a balance sheet turnover of 12.5 million EUR a year, and an average of 250 employees can also invest in the new BlackRock blockchain ETF. For others, the fees are lower when doing the investment yourself.

The iShares Blockchain design is to track the NYSE FactSet Global Blockchain Technologies Capped index. The new fund has acquired a listing on Euronext in Amsterdam under the ticker BLKC with a total expense ratio (TER) of 0.50%.

What are the main holdings in Blackrock Blockchain ETF?

BlackRock unveiled that 75% of its holdings consist of blockchain companies such as miners and exchanges. The other 25% are companies that support the blockchain ecosystem, such as payments and semiconductor companies. The fund includes 35 global companies out of 50 holdings. These include fiat and cash derivatives that do not necessarily invest directly in cryptocurrencies.

The new ETF exposes European clients to reputable companies such as Coinbase, Galaxy Digital, and Marathon Digital. Some of these companies are among the top 5 holdings in the fund.

The distribution of the other holdings includes 23 IT companies, six financial companies, and one communications company. Paypal, Nvidia, and IBM are part of these other holdings. It is worth to note that the Blackrock Blockchain ETF is listed in USD, which is kind of unusual in Europe where most of the instruments are listed in EUR.

Description: What do you know about Tron? Learn the facts and see the latest news, while discovering where you can trade TRX.

The new blockchain-based fund launch is in a period where there has been increased blockchain technology adoption for the private and public sectors. Product strategist for thematic and sector ETFs at BlackRock, Omar Moufti, shared that the firm believes digital assets and blockchain technologies are increasingly relevant for its clients as use cases develop in scope, scale, and complexity. He reiterated that the continued proliferation of blockchain technology underscores its potential across many industries. The iShares Blockchain Technology UCITS ETF exposes BlackRock’s clients to engage with global companies that push the development of the emerging blockchain ecosystem.

BlackRock already exposes its United States Clients to blockchain and cryptocurrency-related products via its iShares Blockchain and Tech ETF. The iShares Blockchain ETF fund for the European market is BlackRock’s most recent foray into digital assets. A similar move by the company was when they created a private spot Bitcoin trust on the 11th of August as Crypto Lists reported. The fund is only available to U.S. institutional investors and seeks to track the performance of Bitcoin, less the expenses and liabilities of the trust.

In April, the asset manager participated in a $400m fundraising round for fintech startup, Circle. Other than its investment, it also took the role of a primary asset manager of its USDC Cash Reserves. It also partnered with Circle to explore capital market applications for its stablecoin. It also revealed in early September that it will utilise Kraken’s CF Benchmarks’ bitcoin index for a crypto offering.

BlackRock’s continuous involvement in crypto is due to the increasing demand for investment strategies in the digital space as the ecosystem expands. It is also not the only financial services heavyweight to delve deep into crypto. Banks such as JPMorgan and Nomura and asset managers including Fidelity and Abrdn have recently launched digital assets offerings.

The Crypto ETF is gaining significant traction that exhibits the market’s maturity. Crypto Lists received reports that Blackrock is also working on a metaverse-related ETF, but in case you prefer to save money and have more flexibility – it is better to invest yourself when doing crypto trading. Then you will have lower fees, do not have to be a professional investor, can invest in any stablecoin (not only USD that Blackrock currently does).

Description: Follow the best investors with eToro copy trader. It is free to get started. Try now!

It is proposed to be the iShares Future Metaverse Tech and Communications ETF. The fees and ticker are yet to be listed. However, it could include firms with products or services relating to virtual platforms, social media, gaming, digital assets, and augmented reality. BlackRock Technology Opportunities Fund co-portfolio manager, Reid Menge, perceived the metaverse as a revolution in the making.

Will Tron (TRX) go beyond $0.075 soon?
Saturday, 22 Oct 2022 12:20 pm
In recent news, some analysts have predicted that the TRX coin could be set for somewhat of a bull run. The crypto has been discussed as deflationary after the TRON Network agreed to introduce a mechanism that decreases its total circulating supply over time, making the coin appealing in some regards when compared to inflationary currencies. If the coin manages to break through the resistance level of $0.075, it may continue its run toward a year high of $0.088, and perhaps further to $0.1! You can sign-up for Binance here to make an investment in TRX...
Read the full newsflash
TRX