The TRX network aka TRC20 blockchain, was established to offer a decentralized platform in the industry. TRX has consistently been gaining attention from cryptocurrency experts, which in turn has resulted in its massive market capitalization. One of the reasons is that it only cost around 1 UST to transfer Tether with Tron, while the Ethereum (ERC-20) blockchain charge up towards 20-25 UST for the same type of transactions.


The Tronix ecosystem, later renamed to Tron ecosystem (TRC20), was created to develop a decentralized internet. The blockchain concentrates on improving users' privacy while simplifying the distribution of content. The platform is both developer and user-friendly, while the superfast transfer speed and amazingly low transfer costs with Tron blockchain made it the given way to transfer Tether. Besides cost and speed advantages, along with privacy and user-friendliness, this blockchain is the perfect solution for removing the present limitations that are linked to geological locations when dealing with centralized systems.

Tron's network was first announced in September 2017 by Justin Sun – a renowned tech entrepreneur and the developer behind Tron's technology. Since its foundation, Justin has been serving as the head of Tron's Foundation and was also the CEO until December 2021 when he stepped down. After the ICO (Initial Coin Offering), Tron's main-net was released in 2018. Since then, the blockchain has earned itself a spot among the best 20 cryptos based on marketcap. For a brief moment in 2021, the network was ranked among the top 10 cryptocurrencies. TRX is referred to as a governance token, and it operates on Tron's Virtual Machine (TVM). The role of the TVM is to execute smart contracts, which are part of the TRC20 ecosystem. To establish and maintain security, the platform employs a consensus mechanism known as the DPOS (delegated proof of state). On-chain governance also means that TRX holders play a crucial role in reshaping the blockchain's future.

An excellent way to transfer Tether is by using Tron blockchain (TRX), since transfer fees are without a doubt the lowest out there for this stablecoin.CryptoLists.com

Tron is a blockchain and technology based on a decentralized database system that acts as the backend for cryptos. Presently, it's mentioned among the most promising platforms that are powered by blockchains. The reason why Tronix was created was to eliminate the need for centralized systems when transacting online. It was developed to offer a decentralized platform that concentrates mainly on content delivery. This blockchain aims at achieving two crucial priorities – decentralization and democratized content delivery system. Both of these priorities are achieved by employing a sequence of permissionless protocols, as well as tools and platforms that possess the same characteristics. This blockchain has also heavily incorporated smart contracts into its ecosystem. The programming language used by Tronix smart contracts is known as Solidity. It was initially created for Ethereum's network. Therefore, any smart contracts designed for Tron's network are compatible with Ethereum's too. Tron's network is mainly used to develop decentralized exchanges, online gaming, lending platforms, movie streaming, and the like.

Since it first opened its doors, Tron has had multiple utilities across the tech world. Here are a few examples:

Samsung Electronics announced recently that they had included Tron in their Samsung Galaxy S10 series. The move was to allow its users to gain secure and easy access to the wide array of Tronix DApps available in the space.
The official TRX Store is also another utility of TRX – users can shop a wide array of commodities and pay for them using their TRX account balance.

Travala recently developed a travel system that enabled users to book their accommodation on the go. The travel platform also supported TRX as its legal mode of payment. As a result, clients can pay for their travel and accommodation needs with the available TRX balance in their crypto wallet.

- Limited communication about some of Trons projects.
- Still unknown for many beginners - they need to step up marketing.

Several factors influence the transaction and transfer fees, such as: Electricity costs and hardware capacity and competition among TRX miners. The number of simultaneous transfers or transactions competing to be added to a particular block also add to the cost base.

Tron's network (TRX) is the main blockchain used for Tether USDT transactions, and over 70% of all Tron transactions are made with USDT. The reason is simple. They have the lowest costs - around 1 USDT is what most crypto exchanges charge for transfers from one wallet to another wallet. If you compare that to Tether transfer with Ethereum (which is the standard), you have to pay about 25 USDT for a transfer. Enjoy the super low USDT transfers with exchanges such as Kucoin and Gate.io. What are you waiting for? Lower your costs and try Kucoin today! This way, you get amazing fees for stablecoin transfers thanks to Tron blockchain.


TRX has been performing exceptionally well, especially if cross-compared against some of the other crypto ecosystems that were recently created. In the last year, its value skyrocketed by 299%. This growth margin reveals the potential that this crypto has.

Many crypto experts and analysts believe that TRX is most likely to keep up with its tremendous growth in the near future. Having this in mind, you should note that investing in this crypto looks like a worthy investment may be worth it, especially considering the immense popularity that DApps are gaining in the last few months.

Tron's founder is BitTorrent's CEO Justin Sun, who is also a protégé of Jack Ma. The crypto company has its offices in San Francisco and Singapore.

Is Tron blockchain proof of stake?

Although TRX was introduced on Ethereum's network, it was created to rival Ethereum. This explains why Tronix resembles Ethereum. Presently, it looks unlikely that Tron's blockchain could overtake Ethereum's - except for USDT transfers where most smart crypto investors choose tron in order to get 25 times lower fees for transfers.

Since Tron blockchain offers faster transactions speeds per second and lower gas fees, we expect that this network will continue to gain customers over time. If Ethereum fails to improve its transaction speeds and lower its gas fees, TRX could overtake it in the coming years - at least for some type of transactions. Today Tron is the top choice for stablecoin transfers, tomorrow it might be something else.

TRX is the native coin for Tron Blockchain. It is therefore also worth reading more about that on the link below.

Since you are interested in the Tron Blockchain, have a look at the related coins or some of the tokens available on this chain per below.

TRON on the way up, while ETH is going down
Tuesday, 7 Jun 2022 11:00 pm
The crypto sector is still experiencing significant losses, and these have seriously affected DeFi staking in particular. Ethereum blockchain, the largest out there, has experienced a decrease of 35% in DeFi staking. Other major blockchains, including Solana, Binance, and Polygon have also experienced declines ranging from 27% to 38%. Although many blockchains have shrunk since the year started, Tron has set itself apart by increasing its total value locked by 47% month over month in May. As of May, its...
Read the full newsflash
TRON ETHEREUM 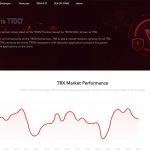 Will This December’s Crypto Market be Bullish or Bearish?
3 hours ago