The Litecoin blockchain demonstrates its capability to handle higher transaction volume as one of the most accepted for transfers after the emergence of Bitcoin. The frequent block generation lets the network support more transactions without any necessary modification of the software in the future. It was created to solve the perceived inadequacies of other blockchains in supporting payments involving smaller amounts of money, and it uses a consensus model called Proof-of-Work (PoW) to verify its transactions.


The Litecoin blockchain offers a global payment system where people can send and receive funds locally or internationally without using a third party. The Litecoin network uses a peer-to-peer internet currency that enables instant and low-cost payments worldwide. The Litecoin network solves problems existing in the Bitcoin protocol, and it's one of the most accepted for transfers. Individuals prefer to transact with it as it's also one of the cheapest for transfers with a block time of 2.5 minutes making it suitable for micro-transactions. The convenience of the blockchain expresses how much people are inclined to use it for their transactions. Also, the network empowers individuals to control their finances. Also, it’s well known for being fully decentralized without any central authorities.

Litecoin was first created in 2011 by Charlie Lee, an ex-Google employee. His purpose was to fix the flaws he saw in Bitcoin ranging from the slow transactions, the mining capabilities, and their scalability. The Litecoin network facilitates cheap transfers, and anyone can use it. Also, the transactions are faster than bank transfers. Litecoin (LTC) is the native cryptocurrency used in the network to facilitate these transfers. According to most users, the network can be described as a lighter, faster, and cheaper version of Bitcoin.

The blockchain intended to enable instant and low-cost payments worldwide.CryptoLists.com

The Litecoin ecosystem operates as an open source, global payment network fully decentralized with no central authorities, and the mathematics in the system secures the network and empowers individuals to take control of their finances. The Litecoin network facilitates the creation and transfer of digital assets in its open source, cryptographic protocol with blockchain technology for recording a decentralized public ledger of transactions on its platform. Its native token, Litecoin, is a creation from a fork in the Bitcoin blockchain, producing faster transaction confirmation times and improved storage efficiency. This is achieved through a new hashing algorithm for Litecoin called Scrypt. The Litecoin network is a better solution as it has substantial industrial support, trade volume, and liquidity. It ensures users can send and receive funds locally or internationally without using a third party.

Anyone with a computer or mobile phone access can use the network. Users of the network trade the native cryptocurrency coin, which is highly liquid and enhances faster and easy trades. Additionally, people use it as it's one of the most accepted for transfers. Also, users can use cheap and quick transfers and send and receive money from anywhere in the world. Users use less time to mine each block, and Litecoin's smaller market cap makes it the ideal place to test new cryptocurrency functionality.


Litecoin Ecosystem facilitates payments, showing that developers ensure input of the proper measures to keep transaction fees as low as possible. The transaction fee is approximately $0.0070 per transaction, and it takes around two minutes to settle each transaction. This network is famous and one of the oldest in the market, having been around since 2011. The Litecoin ecosystem has low prices that simplify people's use as it reduces the need to make significant fee payments.


Many people know it as one of the most acceptable transfer methods as it's been around for over a decade. The fully decentralized operations attract users and provide consistent demand, as it's virtually identical to Bitcoin but provides faster and cheaper services.

The network has proven that it's a good investment as it's widely available. And, the user interface and readability of the network's site make it an attractive player in the cryptocurrency market. Many users view it as a better alternative to Bitcoin and enjoy that they can send and receive money from anywhere in the world.

Different aspects attract miners to the site, such as the complex calculations that keep the network running using the Scrypt hashing algorithm that enhances its solidity. Therefore, miners like to use it as they earn newly minted Litecoin as a reward for their work in the system.

Some of the developers involved in Litecoin Blockchain

▪ Rated at 9/10
The logos below represent some of the developers who have been involved in Litecoin Blockchain. Check out the developer about page, by clicking the logo. There you can see what coins they have developed and at what exchanges, brokers and trading platforms their coins are available.

Who created the Litecoin Blockchain?

An ex-Google employee known as Charlie Lee created the Litecoin network in 2011 to address the shortcomings of the Bitcoin protocol.

Is the Litecoin Blockchain proof of stake?

Will the Litecoin Blockchain overtake Ethereum?

It's unlikely that the Litecoin blockchain overtakes Ethereum as LTC has a limited supply while Ether does not. Litecoin is perceived as a store of value whereas Ether is also utilised in smart contract transactions at a much faster transaction speed. 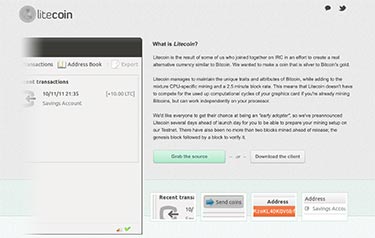 October, 2013 – After working at Google for almost six years, Charlie Lee initiates the creation of the Litecoin network. A first version of the Litecoin website is live, but the site still has lots of lorum epsom text. However, they already made clear that Litecoin uses Scrypt as a proof-of-work scheme. Scrypt uses the low-latency cache memory of modern processors to provide greater hash-speeds on CPUs in comparison to GPUs.

November, 2012 – The Litecoin blockchain differs from its Bitcoin counterpart in that it tries to have smaller blocks, and generate them four times as fast as the Bitcoin network allows. Still, with a Layer 2 solution such as the Lightning Network, Bitcoin transactions can move faster.

January, 2016 – Charlie Lee, the original creator of Litecoin, goes to work full-time as managing director for the Litecoin Foundation.

March, 2017 - The new website of Litecoin.org goes live. They call it: "A global decentralized currency based on blockchain technology".

LTC is the native coin for Litecoin Blockchain. It is therefore also worth reading more about that on the link below. 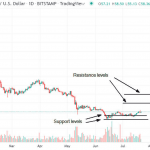