The altcoin called WAGMI Games is centered on WAGMI Defense, a mobile tower defense game that is very interesting and graphically appealing. The long awaited beta version of WAGMI Defense is now open. You have to own a Genesis NFT in order to have access to the current beta, but they are currently accepting waitlist spots to be a part of the downloadable app beta. Wagmi Games origins go back to November 2021 and the amount of followers seem to increase every day. The native token of Wagmi Defense is on the Ethereum blockchain, but it comes with zero gas fees since they are partnering with the layer 2 solution Immutable X.


Wagmi is an ERC-20 token that works on the Ethereum blockchain. The first version of Wagmi Games was a BSC-token, and the updated version is a ERC-20 token (Ethereum network). Since Wagmi works with Immutable X, the transfer costs are both faster and cheaper than normal Ethereum transactions. Its name is an acronym of the famous crypto statement, ‘We’re All Gonna Make It.’ This statement has been used by many different personalities in the crypto world, including Snoop Dogg and Gary Vee. Although some would call it a meme coin, Crypto Lists think that this altcoin has utility since it's is used in the Wagmi Defense video game. The beta version of the game is already available and the game is set to be released in app stores Q4 2022.

This token was created by a number of reputable people, including Ian Bentley, Luis Trujillo, Chris Burkett and Khaled Salem. At the moment, the CEO of the company is Ian Bentley, a businessman who has worked as a consultant for 7 and 8-figure companies. The main goal of the token is to entertain people through the WagmiGames franchise. Wagmi is one of the most awaited play to earn games set to be released in Q4, 2022.

The native token for Wagmi Games, a strategic play to earn game on the Ethereum blockchain.CryptoLists.com

Wagmi Games is a video game that is set in 3022, a time when the human race has developed into a combination of humans and cyborgs. In the game, players can either save the earth or overtake the defence and claim the NiFe. WAGMIGAMES cryptocurrency has a total maximum supply of 2.2 trillion tokens, and since it is set to use an L2 solution, it will not have any gas fees. Unlike meme coins, Wagmi has evolved to have utility. It works as a governance token and is used for various transactions on Wagmi games.

This is the key token in the Wagmi Ecosystem and will give players access to the skill-based contest system. When playing the game, players have to submit a bid, and their skill levels will be taken into consideration. With the Wagmi token wagers, the winner of the game will take all the wagered coins. That means the winner will get to increase their token holdings, while the loser will end up losing their funds.

Initially, players will only be able to purchase in-game NFTs with Ethereum. However, later on, Wagmi token may be added as an option for buying the cryptocurrency. Thanks to a partnership with Immutable X, the transactions are cheaper and faster than normal transactions on Ethereum network.

This cryptocurrency also works as the governance token of the ecosystem and will help with the implementation of different features on the network.

+ Its developer team has the right skill-set and experience.
+ The WAGMIGAMES token is associated with an interesting video game.
+ It works on the Ethereum blockchain with Immutable X to speed up transactions and lower transfer costs.
+ All of the Wagmi Games team members have great track record - and the team is not secret or hidden like many other cryptocurrencies.

- You can’t find it on popular crypto exchanges yet, only DEX such as UniSwap and DigiFinex.
- The project is still in beta version and the final version is being developed.
- Since there are many alt-coins, Wagmi Games faces a lot of competition.
- The token price has fallen drastically in the bear market, but might recover when the final version of the game is launched.

Although this is an ERC-20 token, it will be transferred over L2 protocols. This means users of the coin will enjoy gas-free transactions. However, as per the coin’s tokenomics, the coin will have a few taxes and fees, and these will be allocated as follows:

3% for marketing
2% for product development
1.5% for auto liquidity PoolP
1% for reflections
2.5% for the team

It's great with gas free transactions, and the buy and sell tax is there to incentivise users to hold their Wagmi Games tokens for a long time. When Crypto Lists tried to buy and sell, 12% buy tax was required and 10% sell tax.


Wagmi token is still very new, and its marketing team hasn’t been able to promote the project effectively. However, it is highly likely that more people will get involved in the project, given that similar games are extremely popular. Most discussions on the token and project are held on Twitter, where the token has more than 12000 followers. Its community on Reddit is also growing steadily.

Is this token legitimate?

Yes, this altcoin has utility and works on the Ethereum blockchain. However, you should do thorough research before you invest your money in the coin. Like all other cryptocurrencies, it can easily lose all its value.

Where can I purchase Wagmi token?

Since this token is still very new, you cannot purchase it on major centralized crypto exchanges. Instead, you will have to use decentralized exchanges such as Uniswap, Digifinex, 1Inch, and Saitamask.

Can I play the Wagmi Game already?

The official release of Wagmi Defense will most likely be released in the end of October, 2022. However, there is currently a beta version of Wagmi Game, that is open for NFT holders that got the Wagmi Genesis Collection, which can be bought from OpenSea.

Since you are interested in WAGMI Games, you may also want to check out the coin(s) or token(s) below?

Immutable X partner with Wagmi Games
Tuesday, 28 Jun 2022 9:53 am
Wagmi Games (WAGMIGAMES) aims to minimise gas fees and costs for their NFT holders. What is then more natural than partnering with Immutable X, a layer 2 network that comes without any gas fees? Now, all Wagmi Game transactions can b...
Read the full newsflash
IMX WAGMIGAMES 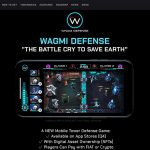 Interview with Ian Bentley from Wagmi Games
27 day(s) ago

Avalanche (AVAX) price estimate Q4, 2022 – Rise or Fall?
3 days ago
All the best cryptos
18+
Historical returns are no guarantee of future returns. All trading in financial instruments involves risk, including currency trading with crypto currencies or CFDs. Financial instruments can both rise and fall in value and it is not certain that you will get back invested capital.
Only invest capital that you are prepared to lose. Crypto currencies are extremely volatile, can involve high risk and is not for everyone, states Crypto Lists Ltd. CFDs are complex instruments that have a high risk of losing money due to leverage. Between 62-89% of all private investor accounts lose money when trading CFDs. You should consider if you understand how crypto currencies and/or CFD works and if you can afford to take the high risk of losing your money.